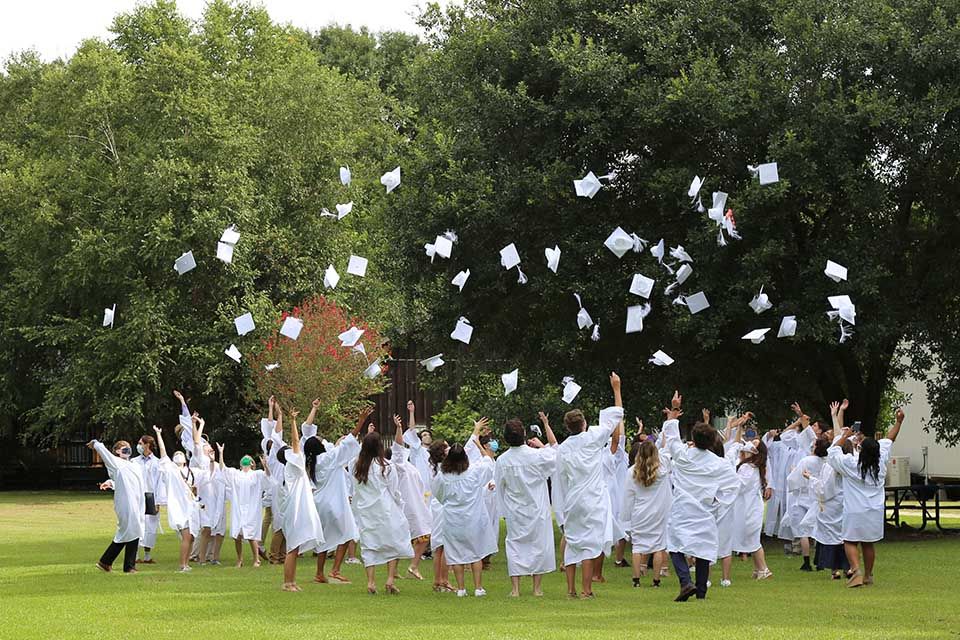 Episcopal School of Acadiana Graduation
August 1, 2020
Seniors who have attended ESA every year since Pre-Kindergarten 3:
Legacy graduates:
The Class of 2020 has five legacy graduates, and these additions to the alumni body will bring the total number of ESA legacy graduates to 25.
Senior Academic and Special Awards
Year-End Honor Roll:

The National Merit® Scholarship Program is an academic competition for recognition and scholarships that began in 1955. Each September, about 50,000 seniors who earned the highest scores on the PSAT country are notified of their advancement in the program. About 34,000 of these students receive Letters of Commendation in recognition of their outstanding academic promise. 16,000 are named National Merit Semi-finalists. We are very pleased to announce that following member of the Class of 2020 was named a National Merit Semi-finalist:

Michael dela Rosa and Hannah Kitakule
Departmental Awards
Earlier this year, the recipients of the 2020 Department Awards were announced. Each year, academic departments at ESA are given the opportunity to recognize the outstanding performance and contributions of members of the graduating class through department awards. Unlike course awards that recognize exceptional performance in one course, departmental awards recognize exceptional performance in multiple courses over a student’s four years in the upper school. They symbolize the department’s appreciation for an extraordinary body of work in the discipline and the student’s passion for the subject.
2020 Shriner’s Patriotism Award
This award recognizes two seniors for outstanding school and classroom citizenship.
Each year, the American Patriotism Award is presented to a young man and a young woman who exhibit the highest level of loyalty to ESA and who, at all times, conduct themselves in a manner that reflects the outstanding qualities of good citizenship, love for God and for fellow man, and love for freedom and for our country.  Winners of the Patriotism Award are chosen by a vote of the faculty, and winners receive a framed certificate and an engraved bronze medal.
Stella Falterman and Lawrence Bourgeois
Bishop & Mrs. Henton Award
This award is named in honor of The Right Reverent Willis R. Henton, first Bishop of the Diocese of Western Louisiana, Chaplain Emeritus of Episcopal School of Acadiana, and his wife, Martha – friendly souls who made it their lives’ vocation to love their fellow man. The Bishop and Mrs. Henton Award is presented at graduation to a member of the senior class who exemplifies the fundamental virtues of care, love, and service to the ESA family and the greater community as did the Bishop and Mrs. Henton.
Rylie Miniex
Faculty Award
Faculty Awards are not given annually and provide an opportunity for the teachers and staff of the Episcopal School of Acadiana to express our collective appreciation for the student’s outstanding contributions to the life of our school.  But the awards serve a second purpose, perhaps more important than the first.  In recognizing students in front of family and friends at this graduation ceremony, the faculty places the student before you, as the embodiment of values that define our life as members of the ESA family.  This year, I will use the recipient’s own words to elucidate those values.
Leah Gerard
Michael dela Rosa
2020 Tom Olverson Award
The Tom Olverson Award is awarded at commencement to a member of the graduating class by a vote of the faculty. Named for Thomas P. Olverson, the first Assistant Headmaster of ESA, the award is given to a student who has a strong commitment to academics. This specifically does not mean a student who excels in achievement by being on the Honor Roll or Headmaster’s List consistently. Rather, the award recognizes a student who works hard at taking advantage of the opportunity available at ESA and makes an awardable effort. The award recognizes a senior who exemplifies the same passion for learning, love of the institution, and genuine desire to maximize the opportunities offered at ESA as Mr. Olverson did while serving here.
Will Bako
2020 Bishop’s Medal
At commencement each year, Episcopal School of Acadiana recognizes the graduating senior who has earned the highest cumulative GPA with the Bishop’s Medal.
Hannah Kitakule
2020 Headmaster’s Award
The Headmaster’s Award is given to a student who has made an outstanding contribution to the school; who takes responsibility for the community or some aspect of community life; and who voluntarily, with care and concern, gives consistently, effectively and positively to help build the community. The closest synonym is probably leadership. The award also includes the criterion of strong academic leadership.
Emily Minvielle
Class of 2020
Will Bako
Isabelle Berthelot
Ellie Bollich
Ben Bordes
Lawrence Bourgeois
Katy Broussard
Caitlin Chen
Andrew Daly
Michael dela Rosa
Braxton English
Stella Falterman
Leah Gerard
Eliza Gothreaux
Vern Guidry
Harper Gunn
Evan Haik
Matthew Hebert
Riley Hulin
Sarah Humble
Ana Huval
Divya Kasarla
Kate Kaufman
Hannah Kitakule
Averie Lajaunie
Charlotte Leavitt
Zoë LeBoeuf
Will Lemoine
Ethan Littlefield
Angelica Llopis
McKenna Miller
Rylie Miniex
Emily Minvielle
Piper Naudin
Oliver Nickel
Emily Olivier
Jessi Olivier
Jack Osborne
Jacques Plauché
Collin Pooler
Anna Claire Rader
Ruthie Reaux
Ryan Rhoades
Robert Rhymes
Keegan Riley
Henry Shuffler
Jackson Spoon
Madi Stelly
Christiaan Thibodeaux
Makayla Vallery
Amaryllis Wiltz
Back