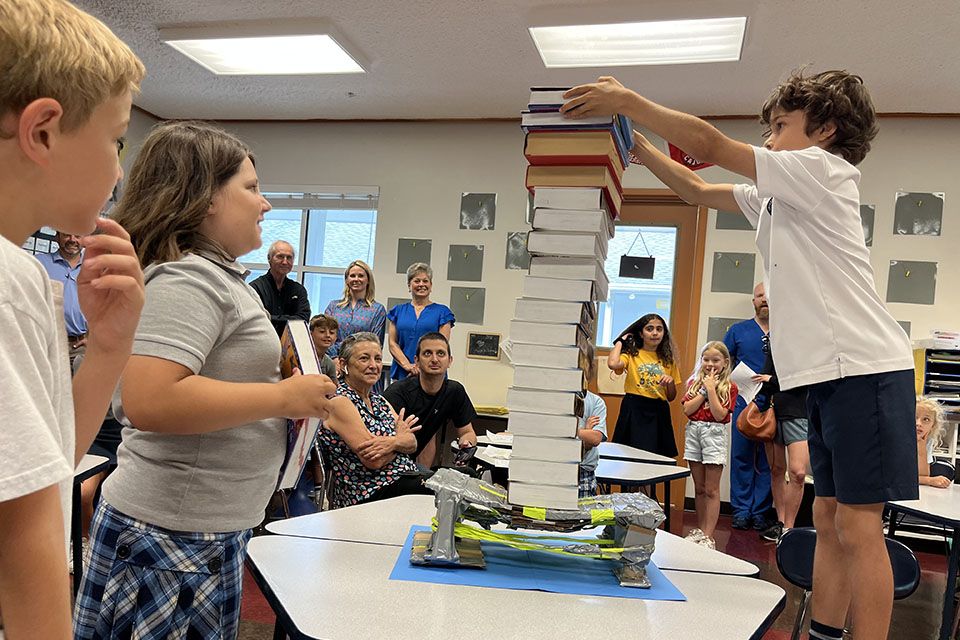 Ms. Joanne's third graders wanted to take on a service learning project this year, and bridge-building gave them the perfect opportunity. Many students are interested in physically building and creating products, many are interested in math concepts, some are interested in the financial aspects of a charity, and all want to help those less fortunate. Using an enrichment math unit about bridges, students were able to build bridges and ask for donations based on how many dominoes the bridges could hold. Ms. Joanne decided, with the students’ agreement, to donate to The Episcopal Relief and Development Fund in order to send the money to Ukraine.
Ms. Joanne described for us how the project evolved:

“The students learned background information about different kinds of structures and forces at play in various bridge designs. They investigated how structures balanced themselves and supported weight by experimenting with making different kinds of structures using books and string. Students put themselves in groups and began planning and building their bridges. After researching The Episcopal Relief and Development Fund, the students learned how to write letters and to create a pledge form, which they sent to their parents and other family members.

While testing their bridges, students discovered that there was no way to use dominoes to measure the success of their bridges when some of the structures were capable of holding dictionaries! They had to change how they would collect the data and measure the pledges. Students voted and decided that one dictionary would be the same as two dominoes.

Finally, the big day came, and all parents and family members were invited. Students made posters to welcome their guests, set up an area to receive donations, and handed out information about the three types of bridges that they had investigated.

It was awesome! Group members presented their bridges, shared the names they chose for the structures, and took turns stacking dictionaries on the bridges while the audience counted. Teachers, students, and parents laughed and cheered for each group. The winning bridge held 18 dictionaries!

And the best part of this is.... the students are contributing $1,075 dollars to help the Ukrainians. I am one very proud teacher!”