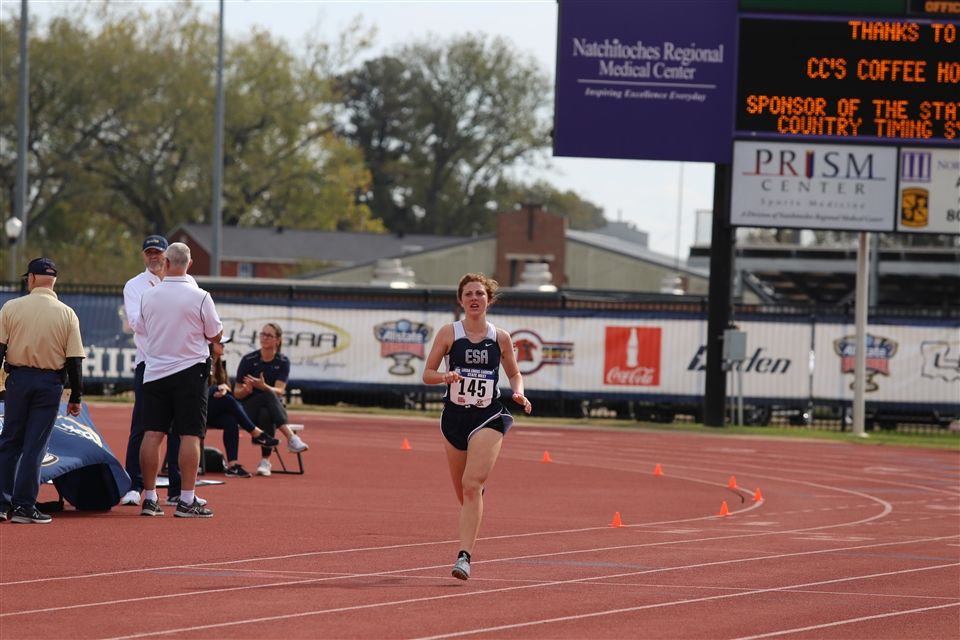 11/29/2017
Once again, The Daily Advertiser has named Samantha Withers Athlete of the Week. Sam won her third individual State Cross Country Championship in a row on November 13th, and led the girls' team to its third victory in a row as well.

"Sam went down with an injury after the first meet of the season, and she was out for three weeks," said Head Coach Laura Magann. "She fought her way back, and ran well at the last regular season meet. Regarding her performance at state, she ran an extremely courageous race.  1 ½ miles into the race, she surged to the lead and never looked back. This performance was good enough for a season best, a three-times individual cross country state championship, a 14-times individual state championship, a top 25 finish among all classes, and she led her team to a state championship with a one point margin of victory."
From assistant coach Jennifer Graycheck: "Samantha is such a focused athlete who puts on a laser sharp focus when it is championship season. Her maturity in running, leading, and competing really came out in this race and we are so proud of her. What's so impressive about Sam is that she remains disciplined in her training and athletic development, while leading her class as President and keeping high grades in four AP courses and one honors course. Beyond all of her accolades, she is a genuine, sweet, and fun-loving person who inspires so many people. We couldn't be happier for her."
Samantha's 14 State Championships include 2017 Cross Country, 2017 Track: 1600m, 800m, 4x400m (2nd in 3200m), 2016 Cross Country, 2016 Track: 3200m, 1600m, 800m, 4x400m (Outstanding Athlete), 2015 Cross Country, and 2015 Track: 3200m, 1600m, 800m, 4x400m (Outstanding Athlete). She's also junior class president, a member of the National Honor Society and an accomplished soccer player. Congratulations, Sam!