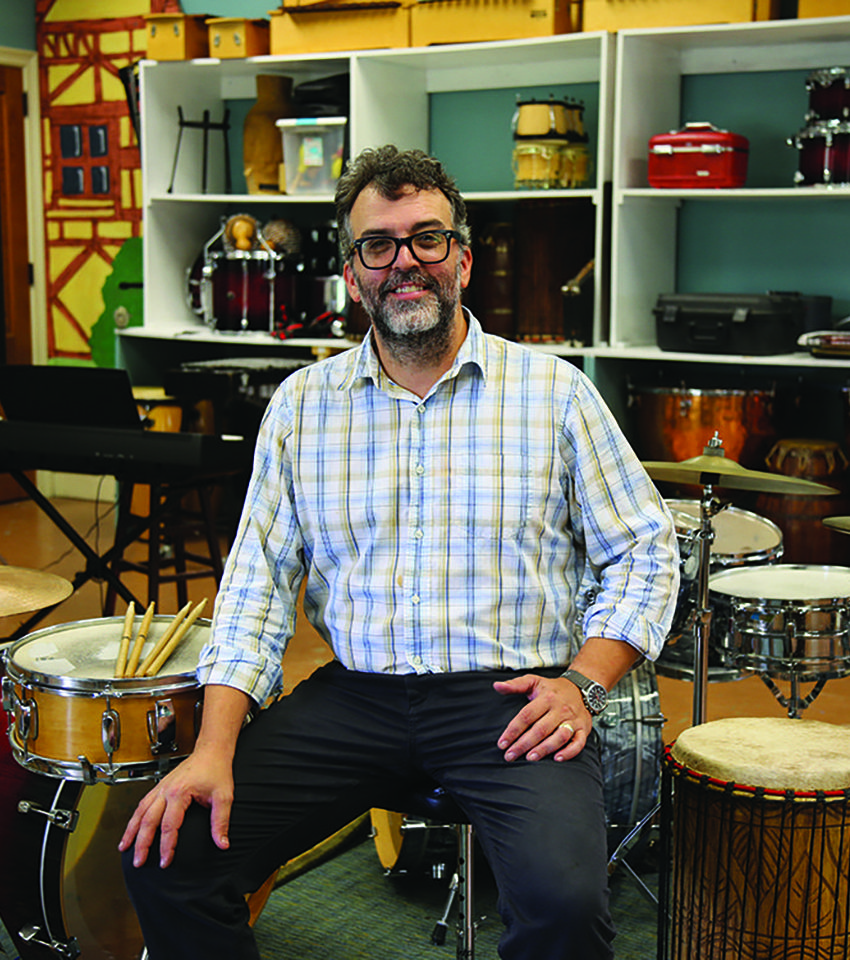 Music teacher and Performing Arts Chair Bill Smith participated in the South Louisiana Songwriters Festival Workshop in 2019. SOLO gave Mr. Smith the chance to learn from professional songwriters, and to collaborate with two other songwriter workshop participants each day for five days. Each evening, the groups - made up of musicians aged 18 to 60 - performed their work for the other participants and shared feedback. “Through SOLO, I learned how to write songs with other people... You have to get out of the way of yourself and let whatever energy shows itself from the group drive the work.”

As part of the festival, ESA also hosted a SOLO songwriter who spent eight afternoons coaching groups of students in writing their own songs. Each of the groups performed on stage at the festival to cap off their songwriting experience. “Our students work well together,” says Mr. Smith. “They support one another and end up producing high-quality work as a result.”

Originally from southeastern Ohio, Mr. Smith studied music therapy at Tennessee Tech before changing course and moving to Asheville, North Carolina, where he earned a B.A. in jazz performance from Brevard College. While in North Carolina, he taught African drumming, instructed drumlines and directed percussion ensembles for middle and high school students as an adjunct teacher.

In 2005, Mr. Smith moved to Los Angeles, where he served as a middle school band director, taught music privately and at the Rock School of Los Angeles, and played professionally. As a percussionist, he recorded with Peter Rowan, Alex Ebert, Edward Sharpe and the Magnetic Zeros, and others. As the drummer and one of the lead singers of Truth & Salvage Co., Mr. Smith toured with The Black Crowes, Lynyrd Skynyrd, Steve Miller Band, The Avett Brothers and The Lumineers. His band traveled to Iraq to play for U.S. troops stationed there.
Mr. Smith's music career took him to Nashville in 2012, where he both played music and wrote songs for various artists. Some of his songs have been featured on the CMT website’s up-and-coming artists page.

In 2014, Mr. Smith moved to Lafayette with his wife Monti, a Carencro native, and daughter Charlie. He found a home at ESA, and has spent the past several school years shaping the Cade campus performing arts program. While he plays guitar and piano, Mr. Smith is primarily a percussionist. He uses instruments such as the drums, marimba and xylophone to engage the students quickly. In teaching rhythm, melody and harmony – the basic elements of music – Mr. Smith says learning is instantaneous with percussion instruments. He encourages students to play all of the instruments in his classroom, and continually adds to the collection. “We use sounds they like and that they listen to for teaching the basic elements.," he says. "I develop the curriculum based on the personality of the class and the students’ needs.”
Back